A second chance for Barnaby

Barnaby was blind from birth and had both eyes removed, but he had a secure and happy life with his owner and they were inseparable. When his owner had to give him up, Mayhew stepped in to help. Barnaby was understandably disorientated, confused and sad when he arrived, but the experienced Kennels team did their utmost to help him feel comfortable and quickly set about making his kennel feel a safe space where he could relax and rest. 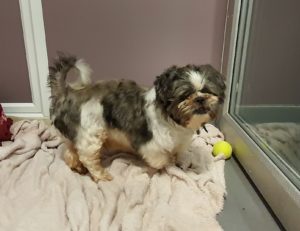 The Kennels team regularly use scented plug ins to help animals settle in the shelter environment and being blind, scent is especially important to Barnaby. They used an anti-stress spray on his blankets and cushions and added a specially scented calming plug-in. Barnaby was provided with dog chews for him to chomp on and reggae music was playing in the kennel block as it’s known for calming dogs.

Dogs that are blind mentally map their environment and memorise the layout. So it’s important not to move things around. To make it easier for Barnaby to climb on to his bed, his blankets were soft and flat, and his food and water bowls were in the same place throughout his stay, so he always knew where to find them.

Mayhew have an onsite veterinary clinic, and on Barnaby’s first examination their vets spotted signs of early Cushing’s Disease, which was then confirmed by blood and urine tests. It felt like another blow for Barnaby as it means he’ll likely be vulnerable to skin and urinary tract infections and may need medication if his condition worsens.

However, with lots of hands on care, Barnaby began to relax – and blossom. Everyone was careful not to startle him and would always speak to him before touching him. His walks needed careful planning to build his confidence and as he became familiar with the route he relaxed more. He had lots of company and would often spend time with the team in their offices. He also really enjoyed playing games in the garden, and he loved his squeaky ball!

Gradually, Barnaby became more assured and confident and when we thought he was ready, he was found a loving new family.

Our members go above and beyond for the animals they care for – just like Barnaby who was given a second chance to find happiness and a loving new home. Could you help our member’s care for animals like Barnaby?