A wobbly kitten’s search for a steady home

When a member of the public found a tiny abandoned kitten in a park in north-west London they called Together for Animals member Mayhew, and their Animal Welfare Officer Tania Mazzoni immediately went to help. She soon noticed that this little puss – later named Brollita – would require some additional, and very special, support.

On the journey back to Mayhew, it seemed that Brollita was very shaky and unstable and, during her intake examination and health check, she fell over several times. These frequent tremors did not seem to be caused by nerves, fear or being too cold, so Mayhew’s vets took blood samples to investigate further, and then made sure she was comfortable in their hospital ward while they monitored her condition and waited for the results. 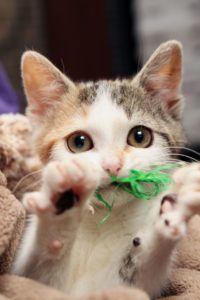 An underlying condition
The blood test results ruled out several possible causes for the tremors, so the vets concluded that Brollita’s symptoms were the result of cerebellar hypoplasia. This is a genetic neurological condition in which the part of the brain responsible for motor movements, balance, spatial awareness and co-ordination is small and underdeveloped. It was now clear why this little kitten’s head was shaking, and why she was extremely unsteady on her feet.

Had Brollita been left to fend for herself, her chances of surviving as a stray would have been be slim. Such a small, unsteady kitty would be easy prey for London’s wildlife, and she could have been seriously injured or killed by a car if she had wandered out into the street.

Special care and attention
Once Brollita’s condition was diagnosed, Mayhew’s vet and cattery staff worked out what her needs were and how they could help. Luckily, many animals with cerebellar hypoplasia can enjoy a relatively normal life and Brollita has a moderate version of the condition, which means she will need some help to eat and drink, and a close eye kept on her as she roams and plays to ensure she does not inadvertently hurt herself.

When she first arrived at Mayhew, Brollita had difficulty drinking, as her head tremors would cause water to splash on her face and scare her. The Cattery team patiently helped her until she got used to the movement, and she was given IV fluids to keep her hydrated until she could drink a sufficient amount of water by herself. Her food was mashed, making it easier to eat, and she was encouraged to play and interact with staff to get her used to being on her feet.

Mayhew’s Cattery team took time every day to socialise with her as well as supporting her specific needs and her mobility came on leaps and bounds.

A happy ever after…
We’re delighted to report that this little girl is now doing brilliantly. She is incredibly affectionate and very fond of games and toys – she loves to play with her feather mouse, and is slowly coming out of her shell, growing in confidence daily.

When she was ready to be adopted, it didn’t take long for a loving new owner to come along and fall in love with her! Brollita quickly settled in to her new home, and soon started making herself comfortable in her favourite spots around the home. Growing more inquisitive by the day, this little wobbly kitten has made the world (and her new home) her playground, and spends the day playing and exploring and acting every part the curious kitten that she has become.

A gift of £5 helps give animals like Brollita the care, love and veterinary treatments they need while waiting for their forever homes. Thank you for your support.