Whilst most of us were looking forward to the festive season, young foal Olaf wasn’t so lucky. Shockingly, he was taken from his mother, dumped on land that was prone to flooding, and left to fend for himself as freezing temperatures and winter weather set in.

Thankfully, the landowners cared enough to get Olaf the help he needed, and they contacted Together For Animals member World Horse Welfare. 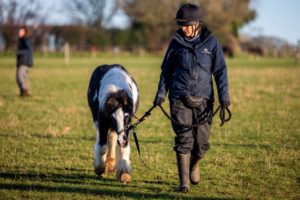 When the charity’s Field Officer Chris visited to assess the case, it was apparent that Olaf was very young and his situation was precarious, with winter weather approaching fast. Tiny Olaf, a black and white colt was so small he barely reached Field Officer Chris’s waist.

With the landowners having taken the appropriate action, World Horse Welfare was able to take Olaf into their care and he arrived safely at the charity’s Hall Farm Rescue and Rehoming Centre, in Norfolk, at the beginning of December.

Chris said: “When I first visited the site, I realised Olaf was clearly very young and couldn’t stay there. He seemed very happy to have some company but was also extremely nervous. I initially kept my distance to give him some space and not frighten him but he approached me repeatedly, as if he didn’t want to be left behind again.

“After he began to trust me, and shared my apple, I was able to check him over. Although he was in reasonable body condition at that point, he could have deteriorated rapidly once the winter weather hit.”

Olaf’s life has certainly changed for the better since coming into World Horse Welfare’s care and he’s coming on in leaps and bounds.

By the middle of January he was strong enough to be turned out 24/7 with a friend – a sight wonderful to see, especially considering the situation he had been rescued from.

Olaf’s groom Megan said: “I’m so pleased with how Olaf is coming along – he’s turned into a really inquisitive, cheeky little chap. He loves a fuss and a brush and has been doing really well learning his basic handling, although he does make me laugh when he has to jump puddles whilst I’m leading him!

“After his awful start in life, being dumped at such a young age, it’s wonderful to see him playing out in the field with a friend, just like any other happy, healthy youngster. It’s heart breaking when you see a foal come in from a situation like that, but now Olaf is safe and has a bright future ahead.”

Our members’ skilled teams care for thousands of animals each year. Thank you for supporting their work.