Abused puppy had ear cut off 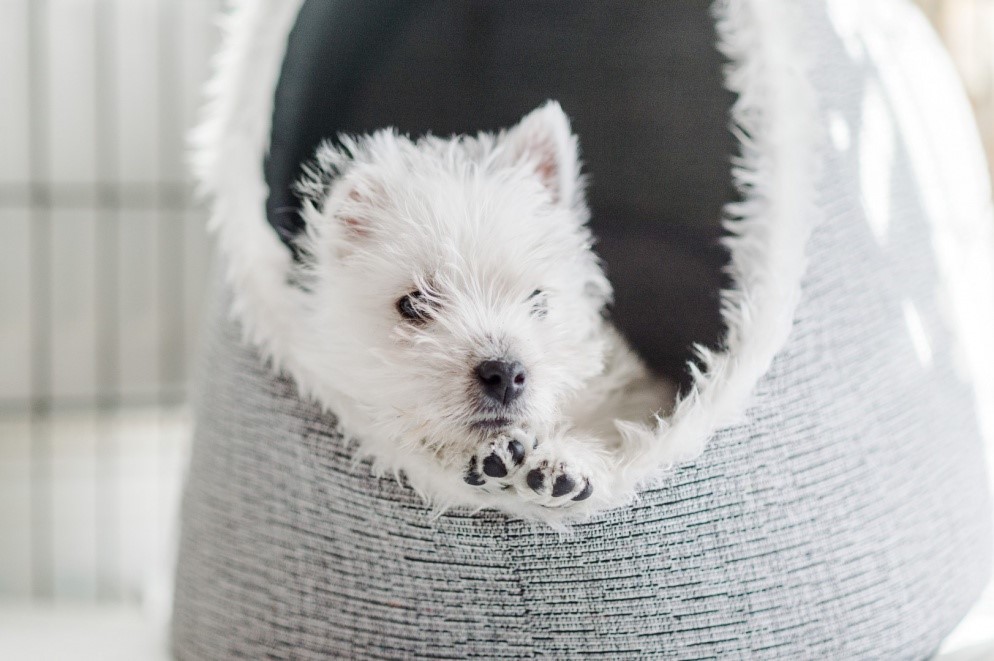 Vincent arrived in a cardboard box. It was the same box he’d been discovered sitting in, at the exit to a car park, an hour or so earlier.

The ball of fluff should have been a pristine white, but he was mucky and sad. He had been left all alone with a soiled blanket, a filthy toy, and some food, but no water, so he was terribly thirsty.

Thankfully, the seven-week-old West Highland white terrier puppy was discovered by a kind member of the public who brought him straight to Together for Animals member Blue Cross. 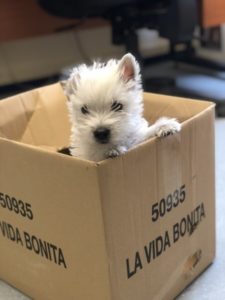 As with all abandoned pets brought through their doors, the bewildered puppy was given the once-over to make sure he got any urgent treatment he needed – but the vets were shocked by what we discovered.

Where a pointy and alert right ear should have been was a stump, with a wound showing a clean cut had been made across it. Someone must have chopped off part of the tiny pup’s ear. And that wasn’t the last of it. His tail was missing – it too had been deliberately removed.

Laura Smart, Blue Cross Animal Welfare Assistant at their Lewknor rehoming centre, where Vincent was cared for, said: “It’s so sad to think that someone could have left such a lovely puppy outside in the cold and all alone, especially with the injuries he has at such a young age. It’s so lucky that he was brought to us when he was.”

We named him after the painter Vincent van Gogh, who famously had only one ear. We took him immediately to the vets to examine his wounds and give him the painkillers and antibiotics he needed.

Laura added: “He was a little overwhelmed initially and quite thirsty, but it didn’t take long for his sweet, cheeky, playful character to soon shine through.”

A kennel is not the best environment for a dog as young as Vincent, who needed lots of human company, and he was placed in foster care while he recovered from his ordeal.

When the phone rang and an email containing a photo of the lonely puppy followed, Sandra and Chas Brooks couldn’t turn him away. The couple were fairly new to fostering for Blue Cross, having helped just one dog before, but they knew they could give Vincent the loving home he had obviously been lacking in his short few weeks of life so far.

“I don’t think he knew what a home was,” said Sandra. “When he came in he was a bit in awe. A couple of days in and he’s got quite vocal! I think for me, and for Chas, we feel we’re giving them a little start of home life.”

“It’s like going into hospital,” Chas added. “You’re either going to be on a ward in the National Health, or have a private room. He gets a lot of attention here and he’s not getting all the noise of a kennel.”

Vincent became a happy and healthy puppy in his foster home and he got all the attention he needed. 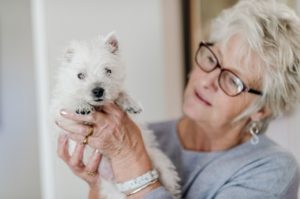 Sandra and Chas took him for check-ups with our vets, and they got him ready for life as a pet by introducing him to the sights and sounds of a home, as well as slowly introducing him to doggy things such as being comfortable with being brushed and handled. But like anyone who hears Vincent’s story, they couldn’t help thinking about his past.

Sandra said: “It makes you wonder. He was obviously taken away from his mum too young. When puppies are with their mum and they grab on to their brothers and sisters a bit much, mum will tell them off, but he hasn’t had that so he is a bit mouthy, but he’s learning.

“You never know when someone does this sort of thing. They might have seen something going on and wanted to take him out of that environment. You never know the full story. That ear to me looks like it was done earlier than the tail. A dog couldn’t have done that; it would be a tear, and that’s a clean cut he’s got. It looks like a scissor cut. It’s barbaric, and it’s just cruel.”

“Most people we speak to can’t believe how anybody could do something like that to a puppy,” added Chas. “It’s just nice for us that we can look after him and bring him on.”

Sandra and Chas lost their darling boy, Blue, last year. With his death being so recent and raw, the couple felt that for them, getting another dog would feel like they were simply replacing Blue, but until the time is right for them to have another family pet they are welcoming foster dogs into their home.

Sandra said: “The best thing of all is that when they do go to a new home, people get a true feeling of what their dog is going to be like. That’s the most important thing. And for us, it’s been so lovely to do and you can give them that little bit of time outside a kennel environment.”

Once he was ready, Vincent found the loving home he deserved.

A donation of £5 per month can help make sure pets like Vincent don’t have to suffer the terrible ordeal of being abandoned, unwanted or unloved ever again.