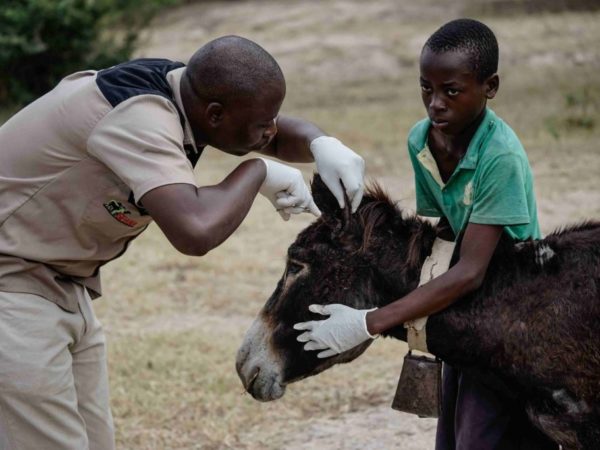 For Zawadi the donkey, a small cut had turned in to a serious infection which was now threatening her life. Together for Animals member SPANA’s mobile clinic came to the rescue just in time for this Zimbabwean donkey and her grateful owners.

Zawadi’s ear was excruciatingly painful. The eight-year-old donkey couldn’t stop shaking her head in discomfort and had become increasingly lethargic. She had first injured herself when, in an attempt to scratch an itch on her face against a tree trunk, she had cut the sensitive skin inside her ear. At first, the small cut didn’t bother the otherwise healthy donkey. But, exposed to the elements under the hot sun, the wound had become infected and infested with small maggots, which were causing her unbearable pain.

Her 13-year-old owner Lovemore had tried in vain to clean the wound using river water, which only made the injury worse. He was becoming desperate but, knowing that his family’s wellbeing rested on Zawadi’s health, he knew he had to act quickly.

Zawadi helps Lovemore, his parents and four siblings to support themselves on their farm in rural Zimbabwe. Hours from the nearest village, Zawadi is the family’s only source of transportation and draught power, ploughing the family’s corn fields and taking the children to school every day. Without her, the family would have no means of collecting water or growing food and would face a much more difficult, isolated life.

As Zawadi’s condition worsened, the family knew that they couldn’t work their only donkey and needed to find treatment as soon as possible if the animal were to recover. Luckily, for Lovemore and his family, help was on the way in the form of SPANA Senior Veterinarian Erick Mutizhe, who was in the community running one of his regular mobile clinics.

These clinics are the only opportunity many rural donkey owners have to seek veterinary treatment in Zimbabwe and serve as a lifeline for sick and injured animals across the country. Erick gently cleaned the wound, using tweezers to painstakingly remove the maggots one by one over the course of 20 minutes.

Once done, he rinsed the irritated wound with saline to clean it and applied an antiseptic ointment that immediately cooled the irritated skin. Erick explained to Lovemore that the wound would need to be kept clean in order to heal and prevent another maggot infestation and showed the worried owner how to apply the ointment daily to speed recovery. He recommended the donkey have several days to rest as the pain subsided.

Erick and his team also took the opportunity to deworm Zawadi, protecting her from parasites in future. He attached a simple reflective collar to Zawadi’s neck, an effective tool for preventing road traffic accidents which are all too common in Zimbabwe. A sick and unhappy animal when she arrived, Zawadi left the clinic with a much brighter future ahead of her.

Lovemore couldn’t thank Erick enough for the time and care he gave his family’s donkey. He promised to follow Erick’s instructions religiously and explained what SPANA’s support means for his family and the community, “Without this vet care, I would have no way of treating her and she would suffer. Thank you to SPANA for all that you have done.”