Aziz rescued emaciated Arifa from a Moroccan horse market and gave her a new lease of life. But an accident in the stables threatened to derail her recovery and, with it, the financial future of her new owner.

As soon as 28-year-old Aziz saw the skinny brown mare at his local market in Marrakech, he knew that he needed to buy her. Although she had been neglected, Aziz could tell that this good-natured horse would make an excellent addition to the family. Aziz was excited to introduce the horse, which he named Arifa, to his wife and two young children. 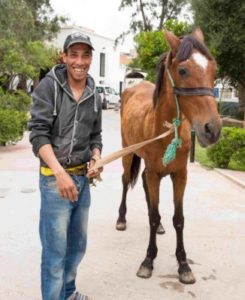 Arifa responded well to Aziz’s care, and after a few weeks had regained some weight. The mare was looking much healthier and was finally back on her feet and enjoying running around her paddock.  So when Aziz came to check in on Arifa one morning, he panicked as soon as he saw her limping. The horse would barely take one step before stumbling in pain, completely incapacitated as a result of an injury.

While Arifa had been grazing, a male horse had jumped the fence into her paddock. When he had attempted to mate with her, the eight-year-old mare had kicked back with all her might to fend him off. But in the commotion, she had accidentally struck the wall of the barn at full force, causing a painful strain in the muscles of her back leg.

Arifa was driven to the SPANA centre, where she was gently unloaded and examined. The team reassured Aziz that his horse would be able to walk again and would make a full recovery with the right treatment. With two weeks of rest, regular anti-inflammatories and painkillers, Aziz could manage his horse’s pain while she healed in the peace and quiet of the farm.

Aziz was relieved to hear that it wasn’t a more serious injury and followed instructions closely to speed along her recovery. Within weeks, Arifa was back to her energetic self and ready for work. The emaciated horse that Aziz bought from the market has been transformed into an affectionate and healthy working animal that will support her loving family for years to come.

Thanks to you, SPANA is able to reach many more sick and injured animals.