Armin the donkey was fighting a terrible respiratory infection and was struggling to breathe. Without medical treatment, his painful condition would only continue to worsen.

Armin was weak and losing strength by the day. He had no interest in eating and could barely drink. The once strong, 10-year-old donkey struggled to breathe as he moved, battling a chronic cough and fever under the unrelenting Tunisian sun. 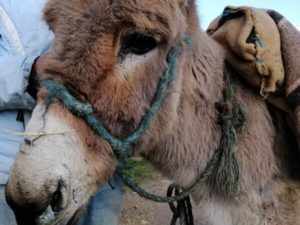 The friendly donkey usually pulls a cart or plough on his owner, Khezri’s farm, dutifully supporting Khezri’s family. But now, Armin could barely stand and his owner was shocked by the change in his personality. The once energetic donkey was depressed and showed no interest in the world around him.

Although Armin had been given several days of rest and traditional treatments, nothing was helping to ease his breathing or bring his fever down. Khezri knew that it was only a matter of days before Armin would succumb to the sickness, so he borrowed a neighbour’s truck to transport the exhausted animal to a mobile clinic which was visiting the area, run by Together for Animals member SPANA.

SPANA’s vets first listened to Armin’s laboured breathing before taking his temperature and checking his nostrils for the tell-tale discharge of a respiratory infection. Observing his lethargy and depression, the team immediately diagnosed him with a severe case of pneumonia, a potentially deadly condition if left untreated. They had no time to lose in treating the struggling animal and gave him an injection of antibiotics and anti-inflammatory treatment to help ease his breathing and make him a little bit more comfortable.

Armin will need several weeks of rest away from the other animals on the farm to ensure that the pneumonia doesn’t spread. As he recovers, his ability to breathe normally will soon return, and with it, his appetite and energy.

The SPANA team left Khezri with some critical advice for how to prevent respiratory infections in the future. They recommended protecting Armin from mixing with other animals outside of markets or watering holes, where respiratory illness can pass easily. They also suggested that when working with Armin, Khezri allow the animal to cool down first before removing his saddle to moderate extreme temperature changes.

Khezri left the clinic relieved that Armin would make a full recovery, explaining: ‘I am very grateful to SPANA for giving me the chance to keep my animal healthy and in good working condition.’

Respiratory infections are a serious threat for working animals across the world. As animals mingle while grazing or waiting outside busy markets, airborne diseases can spread easily. With training and preventative measures, SPANA is ensuring that owners can not only identify, but prevent respiratory infections before they start, saving countless animals from suffering and death.

By donating to Together for Animals you are helping this life-saving work be possible. Thank you for your ongoing support.