Foal baby boom – why your support is so vital

Together for Animals member World Horse Welfare has seen foals born at several of its Rescue and Rehoming Centres this summer as a result of pregnant mares coming into the charity’s care as part of large welfare cases. 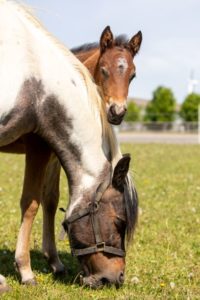 One of the foals at Hall Farm Rescue and Rehoming Centre was born to mum Winona in April and promptly named Captain Tom by  supporters, in honour of national legend Captain Sir Tom Moore. Winona came into World Horse Welfare’s care along with 31 other horses after a large multi-agency operation took place to rescue over 100 horses from a single site, with the remainder of the horses being taken in by other charities. Though she had a foal, Wilfred, at foot when she arrived late last year, Winona was already pregnant again – and thankfully she was rescued in time for her new foal, who was to be named Captain Tom, to be born happy and healthy.

At the beginning of the year 25 horses came into the care of World Horse Welfare’s Belwade Farm Rescue and Rehoming Centre after being rescued from flood plains in Northamptonshire in a large multi-agency operation. Incredibly, nine of the mares turned out to be in foal despite being in very poor condition themselves. Fortunately, they thrived in the care of the Belwade Farm team and over the summer nine healthy foals were safely delivered and are now thriving.

Whilst their mothers sadly had a terrible start in life, these foals are promised a safe and secure future thanks to the support of animal lovers like you. The new foals at Belwade Farm have swelled the initial intake of 25 horses from a single case to 34, which is a huge financial pressure, so your incredible support has never been more gratefully received.