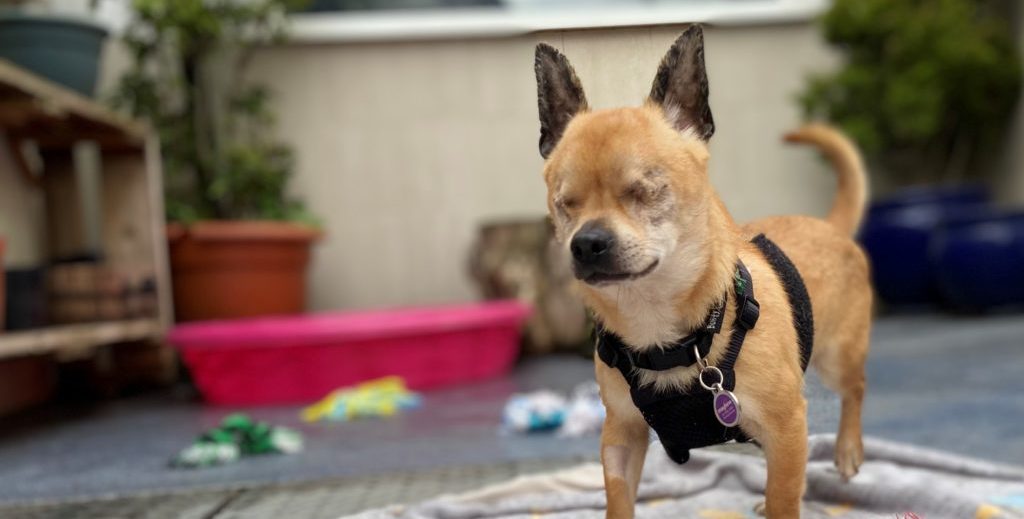 Fred may be blind, but we see a wonderful future for him. The team at our member Mayhew worked closely with this special dog to help him adapt to a new world. Now, this once anxious and timid pup is thriving.

When Fred, a chihuahua mix, first arrived at their London centre it was clear that something was wrong. He hid in his kennel, growling whenever anyone came close to him. He was very distressed and disoriented: pacing, bumping into things and overturning bowls. He was obviously a sweet-natured dog, but it seemed he had a serious problem with his eyes. 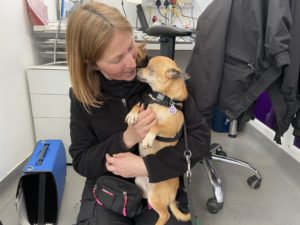 Mayhew’s Veterinary team examined Fred, and even though he was in most respects a very healthy four-year-old dog, his eyes had been badly damaged by a degenerative disease. If left unaddressed, there was a risk of potentially fatal infection. To prevent this, and to make sure Fred was more comfortable, one of the veterinary surgeons performed an operation to remove his eyes. The team all felt this was the best option – Fred couldn’t see anyway, and this way they could ensure his future safety.

Fred was so brave throughout everything – and once the surgery was complete and he had recovered, he was a much happier little hound. No longer suffering from discomfort, he was far more cheerful, and the team got to see his delightful, playful personality in all its glory. He still had a long way to go, but it was wonderful to see his tail wagging at last!

Janet, Animal Carer and Dog Foster Coordinator at Mayhew said: “Fred was such a superstar through all of it. He’s a wonderful lad, with loads of personality and a huge heart, despite his small size. He did brilliantly after the surgery, and our job then became to help him adapt to his blindness as best we could.’”

The team worked very closely with Fred, helping him adapt to being blind. Dogs’ sense of smell and hearing are powerful and sensitive, so they did all they could to help Fred make the most of the senses still available to him. Initially he was quite nervous around people – not being able to see who was who, and where they were. So, the team had to work patiently with Fred to gain his trust. They used treats as rewards (he loves a bit of chicken!) and taught him a whole host of commands and techniques for navigating the world safely. He was such a fast learner!

Janet added: “Once Fred trusted us, we were able to build on that and help him learn to go for walks. It was so important that he could feel confident on uneven ground – learning that when I said “Step!” he understood there was a step coming. I even taught him to respond to “Tree!” Whenever I said that word, he knew there was a tree nearby and he’d get busy sniffing around it. He’s such a clever boy.”

Sadly, sometimes dogs with medical issues or disabilities take some time to rehome, but not Fred! A lovely woman applied to adopt him and fell in love with him. She’d had a blind dog before, so she was very experienced and aware of what Fred needed to thrive. It’s wonderful to know he’s in a brand new chapter with a lovely owner who really understands what he needs.

Giving animals like Fred the second chance they deserve is only possible thanks to your support. A gift from you could enable our members to take in even more animals like Fred, and give them the specialised care and attention they need – as well as helping find them their forever homes. We’re so grateful for your support.