From forlorn pony to driving star!

Palomino gelding Graham came into Together for Animals member World Horse Welfare’s care in 2017 after being found in a filthy stable, underweight and in poor condition. Thanks to the dedication of the Penny Farm Rescue and Rehoming Centre team, Graham, a Welsh cross standing at 11.2hh, was soon unrecognisable from the scraggly forlorn pony who arrived. 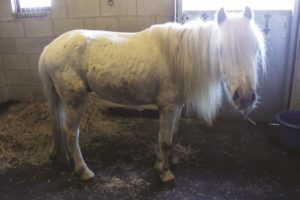 Once Graham reached four years old, the team started working him and his potential as a future driving pony quickly shone through. Graham had only been driven twice when rehomers Nichola and Amelia Waddicor met him, but they could see his potential straight away. Nichola and Amelia are extremely experienced with driving ponies and it was clear very quickly that they were a great match with Graham.

Nichola explains that Amelia, her daughter, was looking for another driving pony and Graham caught their eye “For some reason Graham just took our fancy, so we applied for him online and then had a call from the team to have a chat about him. We traipsed up to Penny Farm in the middle of January – it was freezing! – to see him and Amelia just fell in love with him.”

After a successful home check Graham joined the Waddicors’ other ponies, Caspian gelding Khoja and Dartmoor hill pony Cosmo. Nichola and Amelia had planned that Graham would partner up with Amelia’s star pony Khoja but that pairing didn’t quite work. However, Amelia then realised that Graham worked really well alongside Nichola’s pony Cosmo – and a star pair was born!

Nichola said “Graham’s absolutely full of it – he’s so inquisitive and bold, which is always good for driving. He’s always into the wheelbarrows, the poop scoop, the rugs…everything! He’s so lovable, he’s adorable, he really is. He’s so up for it and so willing, and that’s what you want in a driving pony. They’ve got to want to do it and he absolutely loves it; his ears are always forward looking for the next thing and we’ve got high hopes for him.”

Graham was allowed to grow into his role, following the lead of his experienced team-mate Cosmo, and the partnership went from strength to strength. Graham, now aged five, is thriving as a competitive driving pony and the team have high hopes for his future career.

Nichola continues “If anyone is looking for a riding pony or a driving pony, I can 100% recommend that they should really try World Horse Welfare. I cannot fault this place – they were obviously totally open and you know if it doesn’t work out the pony can come back and will find a good home. The horses and ponies come with a full MOT and you couldn’t ask for more.”

Rescuing, rehabilitating and rehoming horses, and ponies like Graham, is just one of the amazing ways your donations help. Thank you.