This International Cat Day we wanted to thank our supporters for helping cats, young and old….

Anya, Otis, Pickle, Theodore and Squish were dumped outside a vet practice in London in the grips of winter. 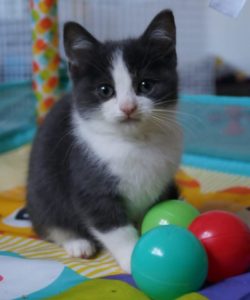 When they arrived at our member Blue Cross’ Hertfordshire centre, the young kittens were weak and suffering with eye infections, very nervous and under-socialised. The team quickly got to work in building up both their health and confidence.

Sarah, Animal Welfare Assistant, says: “When the kittens first arrived with us, they found our centre very overwhelming, with lots of new people, sights and sounds to deal with. It was unclear what they had experienced before.

“They didn’t know what toys were or how to play, so we decided to move them into foster care to reduce the stress and allow them to slowly become familiar with life in home environment.”

Sarah continues: “During their time in our care they’ve slowly gotten bigger, stronger and healthier and started to develop their own individual personalities.

“Their foster carer said they loved spending time with each other whether that is playing, sleeping or relaxing on a lap in front of the TV.”

Soon enough, the kittens were old enough to be found new homes, where they are now thriving.

Our members are currently seeing an influx of unwanted, abandoned kittens, probably due to neutering being delayed during the pandemic. A record 30 unwanted kittens were left at our member Mayhew in one week alone this May – a 50% increase compared to the same period last year.

But it’s not only young kittens that need our urgent help and care. 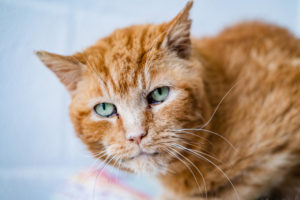 Brian, 14, was found wandering the streets alone with huge, matted clumps of fur along his back resembling the scales of a stegosaurus.

The ginger tomcat had been straying for at least seven months before being taken to a vet practice in Oxfordshire which then asked Together for Animals member Blue Cross to care for him.

He had to be clipped, groomed, and bathed under anaesthetic and needed treatment for several other health issues.

Elisha, Animal Welfare Assistant at Burford, says: “Poor Brian was in such a sorry state when he arrived with us.

“He was severely matted along his spine, dehydrated, and was covered in fleas and ticks. He also needed extensive dental work and some teeth removed.

“He takes time to build trust in people since being homeless but he’s a very sweet-natured boy. He enjoys his food and loves to curl up in a nice warm spot.”

Once he was well enough, we found him a wonderful new home where is he now being showered with the love he deserves.

Our members rehome nearly 10,000 animals each year. Just £3 per month could help provide care for and find loving homes for animals like Anya, Otis, Pickle, Theodore, Squish and Brian – each year.