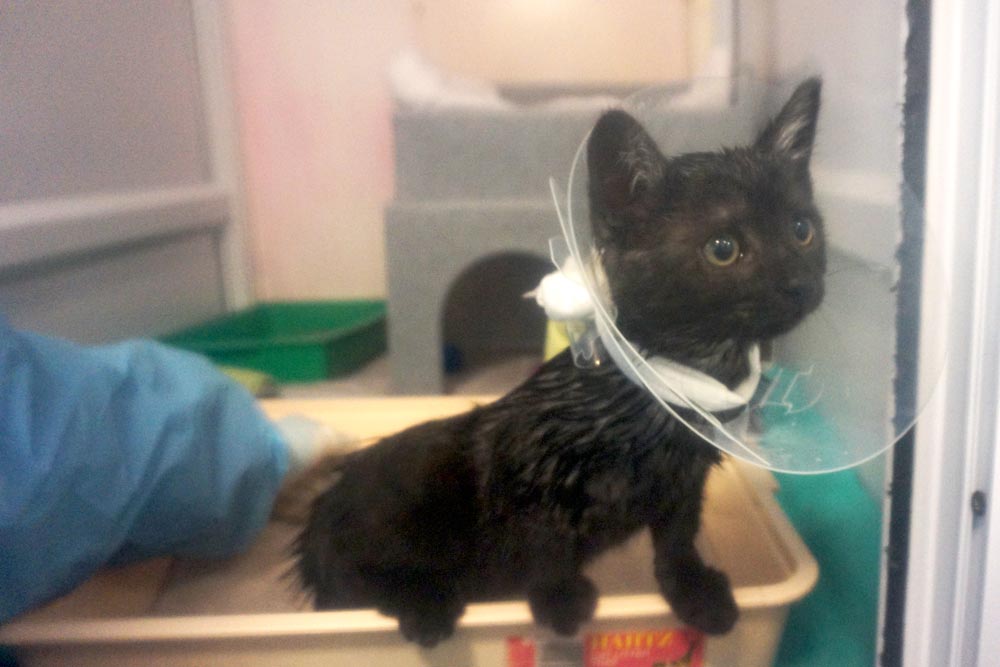 Midnight, a tiny six-week-old kitten, was found earlier this year in North West London by a concerned member of the public, who heard cries for help coming from under a nearby car. The team at Together for Animals member Mayhew were called out, and immediately noticed obvious signs that Midnight was suffering from a severe case of ringworm. The infection had spread all over her face and body, and was the worst example of the disease the team had ever seen.

Ringworm is a highly contagious condition, and can spread quickly and easily between animals and humans.  Midnight was immediately admitted to Mayhew’s isolation unit, where she underwent a series of treatments. Every three days, Midnight was given medicated baths and a buster collar to prevent her licking off the medicated soap. Every other week she received an oral antidote.

Midnight had a really tough start in life. She was found abandoned without her siblings or mum, was too young to have been weaned and was at a vital age where socialising is paramount. Unfortunately, due to the extremely high likelihood of spreading ringworm spores, Mayhew’s vet and cattery team had to use barrier protection suits with every contact, so they were unable begin socialising her. 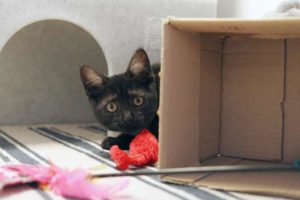 worm, wearing full barrier protection suits and changing everything in Midnight’s cabin, including food and water bowls, bedding, blankets and toys, and litter trays, and incinerate any and all items that came into contact with Midnight after a single use. The whole cabin was scrubbed with Virkon, a specialist disinfectant designed to kill spores.

The quarantine period for ringworm is a minimum of one month and Midnight lived in isolation for nearly two months while we waited for her to be ‘ringworm free’. She was finally cleared of the infection towards the end of February and could then be moved into the kitten block, so she could receive all the socialisation she missed out on in her first few months of life. Mayhew’s Cattery team carefully introduced her to cuddles, play time and the joys of exploring, setting up dozens of cat toys around the place and making sure she frequently interacted with her carers.

When both the Vet team and the Cattery team gave her the all clear, Midnight was put up for adoption on our website, and needless to say, was reserved in a matter of days. She is now settled into her new home, and continues to grow in confidence.

“Midnight’s skin was in a terrible condition when she arrived and she must have been very uncomfortable. She spent 7 long weeks in strict isolation and despite this she is a confident, though cheeky little girl.” – Georgina Costi, Cat Welfare Coordinator, Mayhew

Your kind donations help support the work of Mayhew and help unwanted and abandoned animals receive the care and veterinary treatment they desperately need. To help save lives text PETS to 70085 to donate £3 or visit our donate page.