Moses was found in 2019 by Together for Animals member World Horse Welfare. The handsome, cheeky black and white pony is a far cry from the sorry sight that greeted Field Officer Charlotte Melvin when she visited a group of cobs near Walsall in October 2019 after a member of the public reported concerns for their welfare.

Moses had a headcollar deeply embedded and the wound caused was badly infected and infested with maggots. Moses was removed under Section 18.5 of the Animal Welfare Act and transported to the vets for urgent treatment. He remained there for four days due to the extent of the injury caused by the headcollar, before being transported to Penny Farm. 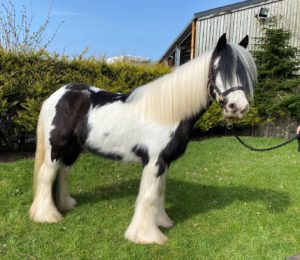 Thankfully Moses was rescued just in time and with the care of the team at Penny Farm Moses was able to make a full recovery from his horrific head injury and his amazing personality really began to shine through. Moses has continued to thrive and is now a happy, healthy pony, complete with a wonderful cheeky character which emerged as he grew stronger. He initially found a home for youngster handling, then returned to Penny Farm earlier this year.

Now aged four, Moses has since been brought into work successfully, taking it all in his stride like an old hand – quite the transformation from the very poorly young pony who first arrived. He was very popular when he was ready for rehoming and has now found a loving home of his own.

Your support helps to provide the expert treatment, medicines, food, rest, rehabilitation, and TLC that animals like Moses need to make strides towards a brighter future – thank you so much.

UPDATE – We’re pleased to say that Moses has settled into his new home, has become very confident and is really enjoying his work! Millie, his adopter, even says that Moses enjoys a good gallop on the canter track up the hill.

Not only that, Moses is also teaching a five-year-old girl and Millie’s mum to ride – he has been extremely busy! Millie says they would all be lost without Moses as he plays such a huge part in their lives, and they are extremely grateful to be able to give him his forever home. It’s with your support that we’re able to help give horses like Moses a second chance in life. Thank you.