Najia is a survivor

When two-week-old Najia first came to our member SPANA’s centre in Chemaia, Morocco, she could barely stand. Najia, which means ‘Survivor’ in Arabic, was rushed to SPANA’s vets by her concerned owner, Houmani, who was seeking urgent help from the team.

Najia was weak and in bad shape. The donkey foal was fighting a severe navel infection and fever and no longer had the strength to feed from her mother. Without immediate veterinary attention, the newborn wouldn’t survive the week.

Houmani was incredibly worried and, learning about SPANA’s centre, travelled to Chemaia and rushed Najia in for the care she desperately needed. 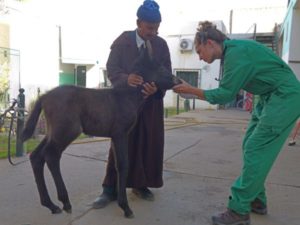 Once the foal and her mother were unloaded and settled, the vet team assessed the damage. A navel infection is a dangerous condition that can occur when bacteria enters the umbilical cord of a newborn animal. The foal’s immune system wasn’t strong enough to fight the infection, which could have spread to the lungs, joints and intestines of the young animal. Using the ultrasound machine, generously donated by supporters, the team was able to examine the navel area and confirm the spread of the infection.

The team told Houmani that he would need to leave Najia and her mother at the centre for a few weeks. Although this would put a strain on the family, Houmani was anxious to do whatever was needed to save his foal. He returned to his farm to wait for updates on her condition.

The team immediately put Najia on a course of antibiotics to fight infection and painkillers to ease her discomfort. Once she had been sedated, the team removed the infected remnants of Najia’s umbilical cord, a delicate procedure as the infection had spread so widely.

Najia rested and recovered alongside her mother for several weeks. The vets were delighted to see that, as the foal healed, her playful energy returned. Within weeks, the once–weak foal was charging around the centre, exploring the stables and visiting the other patients.

Houmani relies heavily on Naija’s mother for daily work, such as collecting water, ploughing and transporting goods to market, which helps provide an income to support his family. One of Houmani’s sons is also disabled and can’t leave the farm without the aid of the donkey and cart.

Houmani couldn’t wait to bring his animals home and was thrilled to see such a vast improvement in the young foal. He said: “Najia’s mother is very important to us. Without her, we can’t accomplish our daily work. I was in pain because although Najia and her mother are dear to me, I can’t afford to pay a private vet. A neighbour advised me to bring to them to the SPANA centre in Chemaia. I couldn’t believe that they’ve treated my mule for free! Thanks to the generous people who help our animals.”

The funds raised by Together for Animals helps care for working animals in some of the world’s poorest communities. To help animals live happier, healthier lives visit our donate page.