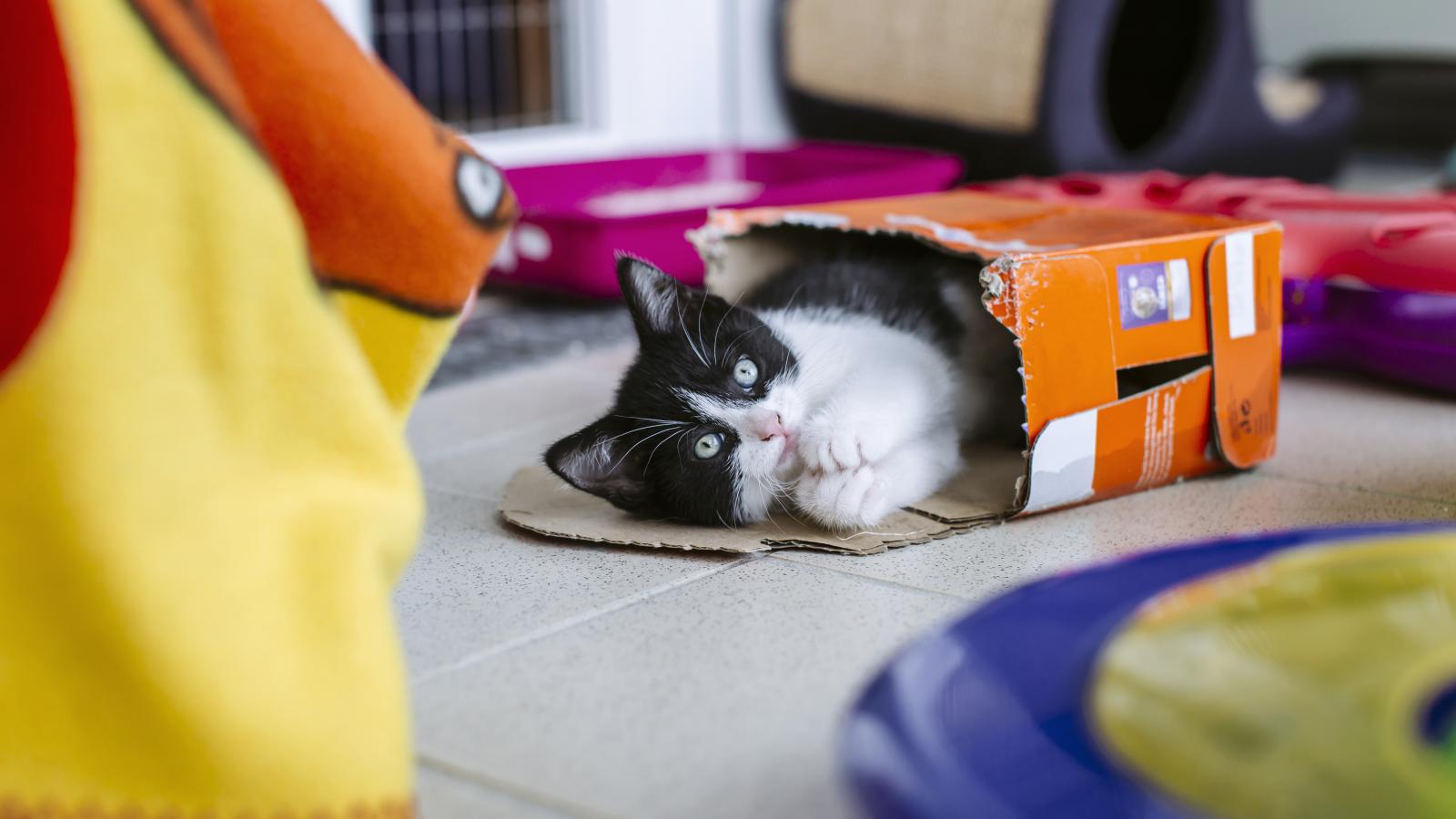 A kitten born with a rare deformity that left her unable to walk is now on all four paws, thanks to physiotherapy at Together for Animals member Blue Cross. 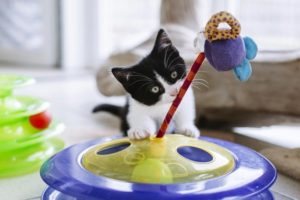 Little Pomegranate was born at Blue Cross’ Suffolk rehoming centre in August, along with sisters Coconut, Papaya and Mango, to stray mum Juno who had been living in a back garden. But while the black and white kitten’s siblings began to explore their pen at about three weeks old, the centre noticed that Pomegranate – or Pom, as she is affectionately known – couldn’t join in.

Susie Winship, Animal Welfare Officer at the centre, said: “Initially we thought the litter were all strong and developing well. However, as the litter became more mobile, we started to notice something wasn’t quite right with little Pom.

“As she attempted to move around, it was apparent her back legs were splaying, and she wasn’t able to walk properly.”

After being assessed by a vet, poor Pom was diagnosed with a rare condition known as swimmers syndrome, a birth defect which causes the legs to splay out and results in a frog-like posture.

Jennifer Bromley, Veterinary Supervisor at Blue Cross Suffolk, said: “The root cause of swimmers syndrome is a mystery and it’s not something we’d seen here at Suffolk before.

“The problem was present in both of Pom’s hind limbs and we were worried whether she would ever be able to walk properly.”

The tiny kitten was immediately put on a physiotherapy programme, with the rehoming team given a strict set of exercises to do with her at least five times a day in three-minute sessions. These included supporting her tummy whilst encouraging walking and extending and retracting her hind legs whilst sitting or lying down.

After just a few weeks, the team began to see a huge improvement, with the kitten able to walk and getting stronger by the day.

Jennifer continued: “All the physio work done by the team had paid off incredibly well with Pom building up enough strength in those limbs so that she could place them correctly.

“The physio programme also meant that she was able to stay with her mum and sisters throughout.”

Susie said: “It was a crucial few days for little Pomegranate as she had to make improvements otherwise there would be huge concerns for her welfare and quality of life.”

Clare Williamson, Centre Manager, said: “Juno came into us in the nick of time, giving birth to her kittens just two days after being brought in.

“The team has worked really hard to get little Pom on her feet, we were all so worried when we saw her struggling to walk. It was heartbreaking.

“Seeing her taking her first steps and walking normally was just wonderful. She’s was very happy crashing around with her sisters, doing all the usual kitten craziness and even managed to climb to the top of the cat tree.” 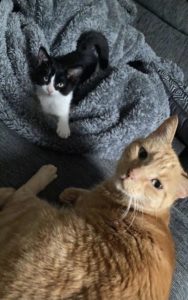 Pomegranate has since made a full recovery and is already enjoying life in a happy home with new owner Ebony Mitchell.

Ebony comments: “I already have a 12-year-old cat with three legs, so when I saw Pomegranate and found out she’d had trouble with her back legs, I knew I had to give her a home.

“Since then she has become quite a character and you would never guess she’d struggled to walk. She sprints and climbs on everything she sees and even plays fetch!

“She does also have a very affectionate side and must have cuddles as soon as we come home.”

Your support helps provide the veterinary care animals like Pomegranate need, and the chance for them to find a loving home.