Providing a lifeline for working animals in Morocco

The global pandemic has had a huge impact on working animals and the families who rely on them in the world’s poorest communities. Lockdowns, restrictions on movement and marketplace closures have led to owners losing their incomes, leaving animals more vulnerable.

Thanks to your support, our member SPANA’s emergency clinics have provided a lifeline to working animals and their owners throughout this crisis. 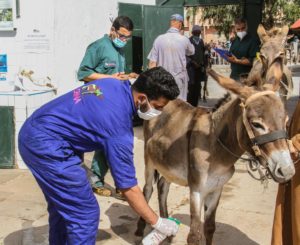 Ajej the mule has worked with his owner, Issam, for several years. Late one evening, the trusted mule began rolling on the ground in agony, his condition becoming worse as each hour passed. Issam was deeply concerned and went to SPANA’s centre in Chemaia, Morocco for help.

As the emergency clinic opened for the day, Ajej and Issam waited in line to be seen with dozens of other animals and owners. The mule was clearly in discomfort, but patiently waited while Issam was given a mandatory mask and had his temperature checked before entry.

The SPANA vets immediately diagnosed Ajej with colic – a condition on the rise during the pandemic. Like many owners, Issam was unable to afford feed for his mule, and had been letting Ajej loose to graze. The mule had been picking through rubbish and had eaten a plastic wrapper which became lodged in his digestive tract.

The team sedated the distressed mule before they pumped water through his nostrils and into his stomach to flush out the harmful plastic. After receiving treatment, Ajej was led to the stables to recover from his ordeal. Once discharged, the vet team provided Issam with emergency feed rations and before long, Ajej was free from pain and on the mend.

SPANA’s emergency feeding programme is only possible because of your ongoing support. Thanks to your kindness and generosity, in Morocco alone, SPANA has distributed more than 274,000kg of emergency feed to thousands of working animals.