The global pandemic is having a devastating impact on working animals and the communities that depend on them around the world. When strict travel restrictions were put in place, working animals were left in a tragic situation. Many owners lost their livelihoods overnight and became unable to afford to feed or even look after their animals.

In 2020, Together for Animals member SPANA’s work has been more important than ever – as their dedicated vets continue to provide free emergency treatment and lifesaving care to animals like Marwa. 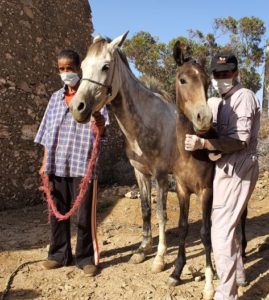 Marwa is a lifeline to her owner, Youssef. The mare works each day in rural Morocco, ploughing the land, transporting produce to town, and carrying essential drinking water from the nearby well. When his trusted horse became pregnant, Youssef was thrilled to have a new addition to the farm. Months later, Jamil the foal had settled in at the farm nicely, spending his days eagerly following his mother around and playfully chasing chickens.

When Youssef entered the stall to feed his horses one morning, he was shocked to discover blood on the stable floor. After checking each horse for injury, Youssef found that one-year-old Jamil had been passing blood in his urine. The foal was visibly uncomfortable, kicking at his belly in an attempt to ease the pain. Youssef knew that his young horse needed immediate treatment. However, in the midst of lockdown, the owner worried if he would reach the centre in time.

Youssef first sought the travel permission and pick-up driver he needed to transport Jamil, before making their way to the SPANA centre in Chemaia as soon as they could. Upon arrival, their vets carefully examined Jamil and diagnosed him with a rare bladder infection. They acted fast, knowing that if left untreated, Jamil would soon succumb to his infection.

The team first injected a painkiller to soothe Jamil, before using a local anaesthetic to numb the area. They then inserted a catheter to flush the harmful blood clots from his bladder with saline. Once this was done, the vets administered an antibiotic to fight the agonising infection.

Jamil and Marwa were led to a stall, where the foal was given plenty of fluids and time to rest. Before sending them home, the team taught Youssef how to administer the antibiotics and painkillers that would aid his foal’s recovery. A few weeks later, Youssef was incredibly relieved and grateful to have Jamil back to full health. Youssef said “Thanks to the SPANA team, my foal was saved.”

Jamil and Marwa are valuable members of Youssef’s family, and would struggle to survive without free veterinary care. Thanks to your regular support, you are helping treat vulnerable working animals in urgent need. Thank you.