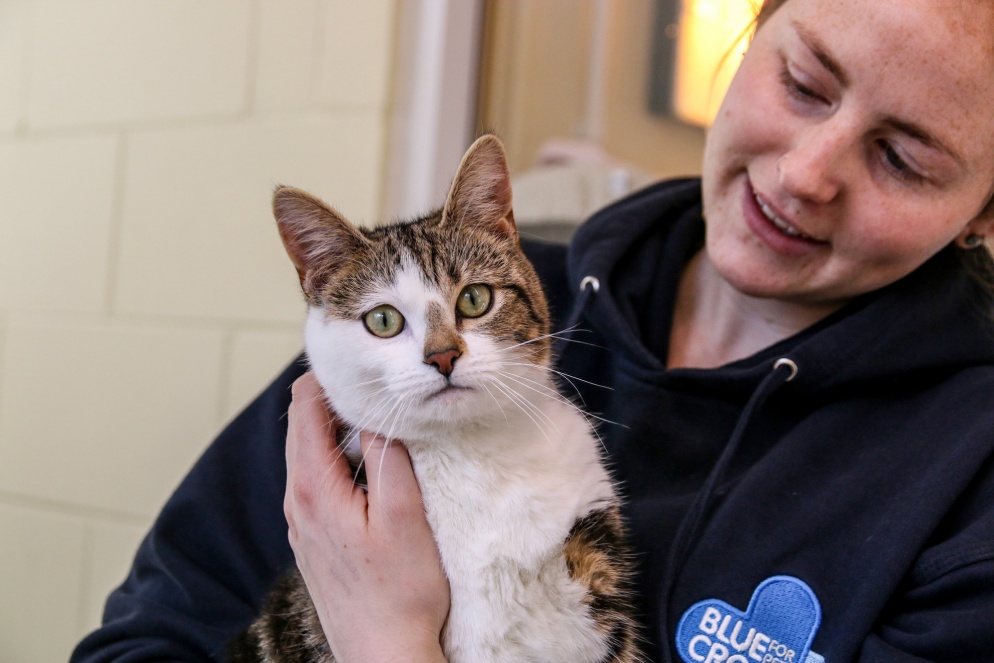 Two kittens with one of the worst cases of a life-threatening stomach parasite that Together for Animals member Blue Cross has ever seen are now in loving homes after months of intensive treatment.

Stevie and Munroe were brought to Blue Cross’ Grimsby hospital in Lincolnshire in July last year after being found on the streets of the town with their stray mother, Sylvia.

They were suffering from severe diarrhoea, which had left them terribly sick, frail and weighing just a third of a kilo.

Blue Cross vets and nurses gave them emergency treatment and, once they were well enough, they were transferred to their Lewknor rehoming centre in Oxfordshire to find a home.

But while their mum made a full recovery and was soon rehomed, Stevie and Munroe suffered another setback.

Megan Bailey, Animal Welfare Assistant, said: “Sadly they fell ill again. We had lots of tests done, but everything came back negative.”

Without knowing what was making the brothers so poorly, the team at Lewknor continued with regular worming and intensive nursing in the hope there would be a breakthrough. There often is with mystery illnesses like this in cats, but not for poor Stevie and Munroe. While they would show brief signs of improvement, they would always get sick again.

“It wasn’t just frustrating, it was heart breaking,” said Megan.

Their only hope lay in treatment for a nasty parasite called tritrichomonas – they had already tested negative for this, but false results are possible, so the Lewknor team felt that it was worth a shot.

But it needed to wait until Stevie and Munroe were three months old due to the possible side effects of the medication, which has to be specially imported.

To everyone’s relief, they not only tolerated the medicine, but their diarrhoea cleared up properly for the first time.

Megan said: “In the end three courses of treatment were needed. But every penny was worth it to be able to help such sick kittens recover, giving them a chance to live a long and healthy life.”

It was the highest number of courses of this treatment that any cats in the care of the Lewknor centre have ever needed. And, throughout it all, the brothers had to remain in isolation to prevent the infection spreading; this meant that they were confined to their pens and could only be handled by staff wearing protective clothing and gloves.

Eve Brant, Veterinary and Operational Supervisor at Lewknor, said: “It was so sad to see them go through it. Having to put up with all the equipment around them and not being allowed that freedom, to be confined like that, must have been so hard for them, but they turned into such lovely cats. They just coped amazingly.”

And, after more than 230 days in Blue Cross care, both Stevie and Munroe went off to the loving homes they deserved.

Your kind donations help support the work of Blue Cross and help unwanted and abandoned animals receive the care and veterinary treatment they desperately need. To help save lives text PETS to 70085 to donate £3 or visit our donate page.