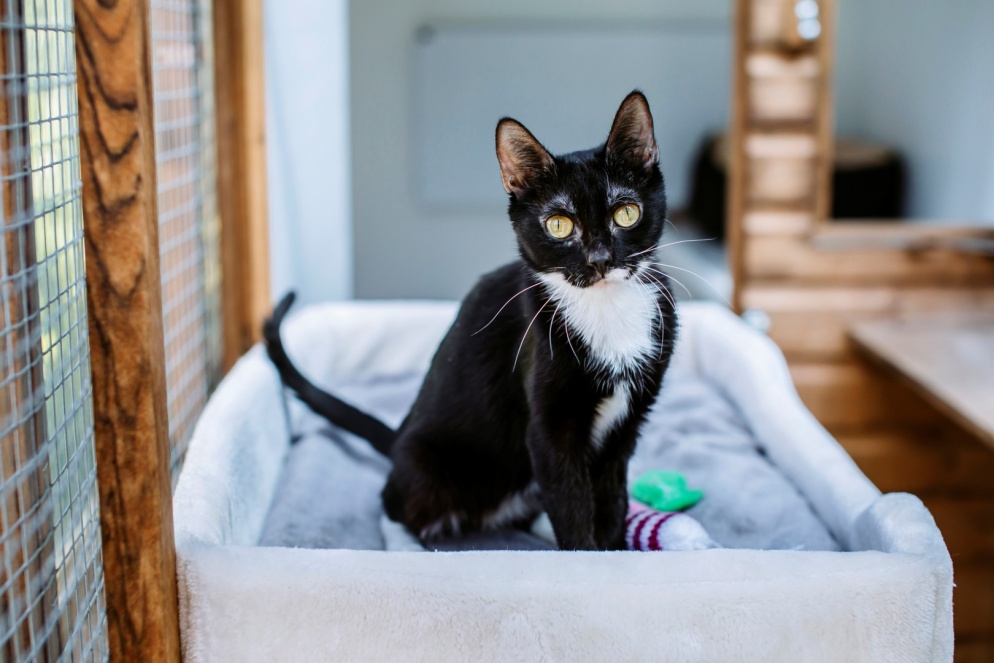 Minnie must have been so sad and confused. The young cat’s owners upped and left one day to never return, leaving the poor girl all alone in a flat without enough food or water, if any at all.

It was in the height of summer and the black and white moggy was soon starving and severely dehydrated. And so, in a desperate bid for survival, she leapt out of the window and fell two storeys. 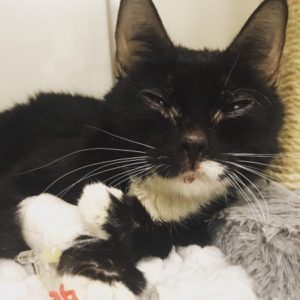 The fall alone could have killed her, and while she was lucky enough to emerge from it unscathed, she had no energy left in her fragile body to move from where she had landed. So she just lay there, emaciated and scared.

Thankfully, she was found just in time by a member of the public who took her to Together for Animals member, Blue Cross’ animal hospital in Victoria, central London.

Nobody knows exactly how long she had been alone for, but by the time she arrived in their care, she weighed just 1.4kg – almost half of what a healthy kitten her age should have been. She was also in terrible condition, with a flaky coat, bald patches around her eyes and sparse fur on her ears.

Amanda Marrington, London Welfare Officer, said: “The person that brought her in said that Minnie had fallen from a height of two storeys after being abandoned by the owners, who were neighbours.

“She was severely emaciated and dehydrated. Thankfully, nothing showed up as broken on her X-rays. She was ravenously hungry and put on fluids and pain relief. We had to start to slowly rehydrate and feed her.

“Despite all she had been through she was so gentle and just craved attention. She was so sweet.”

After a week of round-the-clock care at Victoria, Minnie went off to Blue Cross’ Lewisham rehoming service and although nervous, Minnie was a sweet girl who stole the hearts of those caring for her.

Danielle Durnford, Centre Manager at Lewisham Blue Cross, said: “We fed her little but often, and she was on a special digestive diet. If she was suddenly overfed it would have made her really ill, as she had gone so long without anything.

“She did really well, she held down all of her food. We slowly introduced her to kitten food, as there is more nutritional value in it for her.”

“She was a little bit wary of new things, and was nervous on the first day, but once she realised we were feeding her, she was okay.

“But what we realised very quickly was that if you left food in there and walked away she didn’t actually eat it, so we had to sit here with her every time we fed her. If we got up and left she wouldn’t touch it and would go straight back into her bed.”

After six weeks in Blue Cross care, Minnie found a loving home where she’ll be safe and happy.

Your support helps our members give animals the care, love and veterinary treatments they need while waiting for their forever homes. A donation of £5 a month helps Together for Animals’ member charities keep pets safe and warm in their rehoming centres, until they find loving new homes.