13-year-old blind dog Barnaby found his way into our member Mayhew’s care when his owner’s ill health sadly left him unable to take care of his four-legged best friend.

Barnaby was in desperate need of a second chance, and needed an extra special care plan to help him back on his paws.

As he grew in confidence and was ready to find his forever home, we were so thrilled when ex-Mayhew dog Tess’s owners applied to adopt Barnaby. The two have become an inseparable pair, and we are happy to be able to share this little update from Barnaby’s new owners:

“I’m pleased to tell you that Barnaby is settling in well. Although, we did struggle to get any reaction from him at first and I was beginning to think he might even be deaf too – it was a bit of a worry! We tried all sorts of names to get a response – Barnaby, Barney, Barns, Rugrat. Finally, he reacted to Shortie, and he seems to like it. His recall is still truly awful, but a bit better than it was so we’re continuing to work on it.

“He really enjoys being out in the garden, and it’s wonderful to watch. I was worried he’d bump into our trees but they don’t bother him at all. He seems to sense where they are and avoids them. If I’m not watching, he does love to climb on things though so I’ve had to be a bit inventive with barriers – old plant pots, planks and buckets have come in handy. It’s not very pretty but we don’t care as he’s worth it. He is fond of going for an on-lead walk on the street too and loves to sniff every single tree and lamp post. It always takes ages to get to the other end, but we don’t mind.

“Tess, our German Shepherd from Mayhew, and Shortie are the best of friends. At first, Shortie kept bumping into her and Tess got a bit annoyed. I’m sure she was thinking, “Are you blind or something?!”. They now get on fine and Tess seems amused when Shortie helps himself from her food bowl even when she’s chomping away! 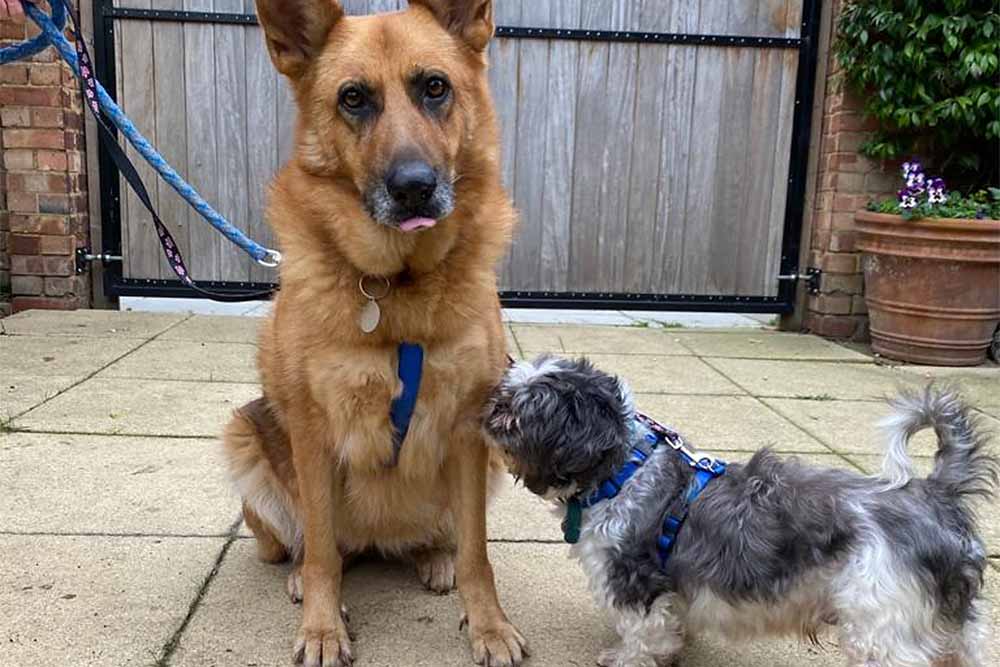 “It’s like watching one of those wind-up toys as he wanders around our house. He goes forward, bumps into something, changes direction and then carries on. His favourite place is anywhere Tess happens to be. He’s particularly fond of her bed and stretches out in the middle of it! And the only time he likes being picked up is when he decides it’s time to be on a settee, and to get off again. Otherwise, I think he gets totally disorientated being lifted. If ever I can’t find him, he’s usually under a table or chair, and now Tess has taken to finding a place under tables too. They’re a real double act, it’s like children making a den. At first, we had a few accidents indoors but he quickly learnt to ask to go out. He also now asks for food and certainly lets me know if his water bowl isn’t filled right up to the top. In fact, he can be quite chatty at times!

“Trying to cook is tricky these days – Shortie is fascinated with my cooker and loves sitting right in front of it whenever it’s on so we keep a close eye on him. He’s also learnt that good things live in a fridge, especially carrots! There’s nothing he likes more than a nice crunchy carrot.

“When he first came to live with us, we had to find him food and water bowls that were low enough for him, everything we had was just a bit too big. Finally, we used one of those tops that go over electric cooker rings, turned upside down. It’s perfect – he gets his chin over the rim without too much trouble. So all in all, we’ve all settled into a fairly normal routine. Shortie seems happy and content, and has found the best companion in Tess – and us, of course!” – Susan, Alan, Tess and Shortie

Our members couldn’t care for animals like Barnaby (now Shortie!) and Tess without your support. A regular gift can help us provide veterinary care and shelter while abandoned animals in need wait to find a new home.