Back at the beginning of March, a Pomeranian cross called Dyson was found wandering down the middle of a busy road in North London in a very sorry state. 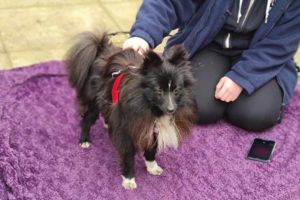 When the member of public came across him, it appeared that one-year-old Dyson had emotionally shut down – he was extremely scared and looked to be completely lost. As well as being very nervous, poor Dyson had a severely matted coat with faeces stuck all around his rear end. Despite her initial concerns, he reacted positively to the member of public’s attempts to help him, and thankfully she managed to bring him safely to our member Mayhew, where they admitted him for further investigation.

During the initial intake examination the team at Mayhew discovered that Dyson had no collar or microchip, and despite later attempting to locate an owner nobody came forward to claim him. Whilst bathing him to get rid of the faeces they also found that Dyson had a fatty lump under his anus, and during his check up he reverse sneezed a few times, which is when a dog makes an unusual honking sound and is usually caused by irritation of the soft palate on the roof of a dog’s mouth.

Over the next couple of days the team settled Dyson down into a warm and cosy kennel and made sure he felt safe and secure, wanting to build up his trust before the Vets and animal care team took a closer look at him. He was visibly nervous but underneath his fear he showed clear signs of being a friendly and playful dog, and the Kennels staff watched over him around the clock and gently tried to bring him out of his shell.

Mayhew’s night team said that Dyson came around after they spoke very softly to him, and soon began to let them stroke him and feed him by hand. Once he’d become more familiar with them and his surroundings, he was admitted into the Vet Clinic for a more thorough health check and so they could clip off his heavily matted fur. Thankfully, neither the fatty lump or Dyson’s reverse sneezing indicated that more investigations or treatment were necessary. 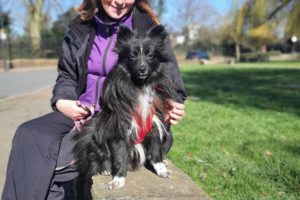 For the next few weeks, the team at Mayhew did everything they could to make sure Dyson felt loved and cared for, and developed an individual care plan for him that would help him build confidence. Luckily, Dyson seemed to love going on walks and playing with his toys and the team, and day by day he started to open up and regain some of the spirit he was born with.

He soon became known to us as a sweet and affectionate boy, and as time went by he grew further and further away from the dirty shell-shocked dog first discovered. After almost two months in Mayhew’s care they knew he was ready for rehoming, and to his – and our delight – he was adopted shortly after being listed.

Dyson’s new owner will continue to work on his care plan and keep an eye on his reverse sneezing, which may recur intermittently very much like human hayfever. The sneezes can be triggered by anything from pollen and dust mites to being over excitable or drinking or eating too fast, but should not cause any lasting damage or distress.

We are all absolutely thrilled that Dyson got the happily ever after he deserves, and at Together for Animals we are committed to helping our members give every animal that comes to them the best possible care and attention.