Ginger loses leg but finds a new lease of life

When seven-year-old stray Ginger came to Together for Animals member Mayhew with a fractured hind leg, their vets had a tough decision on their hands in terms of potential treatment for the cat.

They considered surgery to attempt to fix and set the bone and amputation, and it was eventually agreed that in Ginger’s case the removal of the full limb was the best and safest course of action. 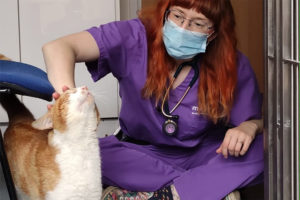 It was unclear how Ginger came to injure his leg or indeed when exactly it had happened, but upon x-ray the fracture was revealed to be incredibly complex and delicate, and had clearly caused him a lot of pain whilst he was out on the streets.

Unlike amputation, which cats can actually adapt to fairly quickly, surgical intervention to try and mend the leg would have invited a lengthy recovery period and required multiple additional procedures such as frequent x-rays and tests to check it was healing properly.

There was also no guarantee that an attempt to mend the fracture would be successful, and because Ginger is FIV positive, there was also a concern over how well his body would have tolerated surgical implants and possible repeat procedures over the years.

Ginger was therefore admitted to Mayhew’s vet clinic for a full hind leg amputation, which the vets and vet nurses handled expertly with no complications. Once he’d come round and it was clear that Ginger would make a full and straightforward recovery, he needed to get used to life on three legs.

Apart from some localised bruising around his stump, he adapted extremely well straight away and proved himself to be an energetic and friendly addition to the Cattery.

Justin Ainsworth, Head Vet, said shortly after checking up on Ginger the following day that “He really was super bright, and the happiest I’d seen him since he was admitted. He was moving around with ease and seemed very comfortable.”

Although he’d arrived as a stray and had clearly been out on his own for some time, Ginger had a microchip through which the team were able to trace his original owner. Sadly, they were not able to take Ginger back into their care, and so signed him over to Mayhew so he could be found a new forever family.

After just a few short weeks Ginger was almost healed and was making the most of his fresh start. It wasn’t long before someone fell in love with his cheeky face and met all his needs – further proving that his amputation and positive FIV status didn’t hold him back whatsoever!

Your support helps to provide the expert treatment, medicines, food, rest, rehabilitation, and TLC that animals like Ginger need – thank you so much.