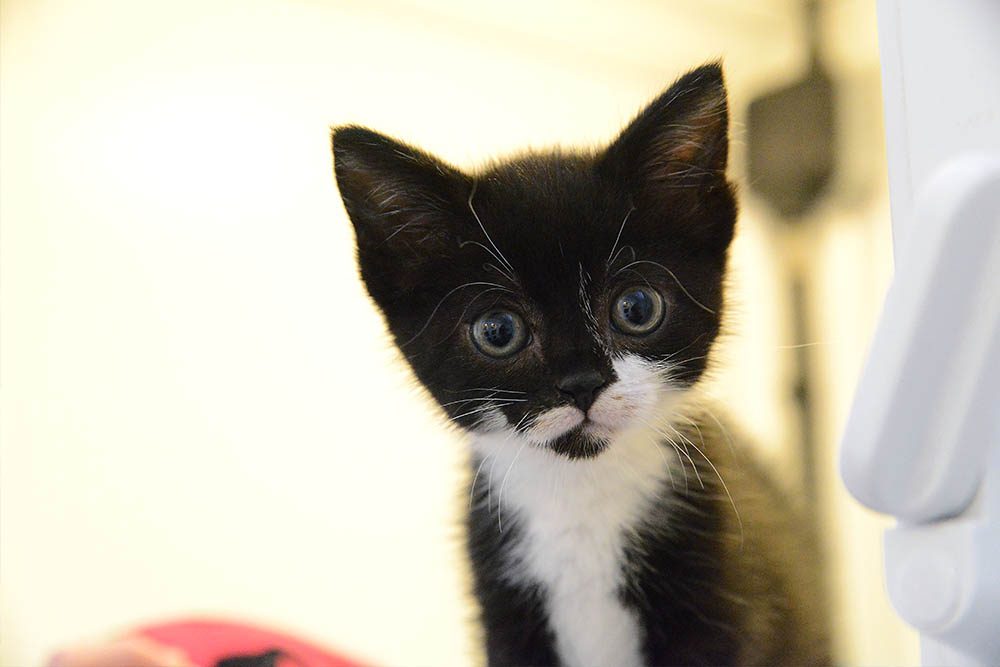 When a heavily pregnant stray cat came across a seemingly abandoned property, she thought she’d found the perfect place in which to give birth and bring up her young kitten.

However, she was not to know that the property was in fact being renovated – and one day, the sudden shrill sounds and loud noises all became too much.

The mother cat was so frightened by the building work going on around her that she ran away and left her newborn daughter behind to fend for herself. 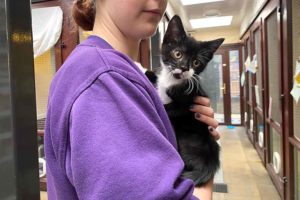 Luckily, a member of the public spotted the tiny black and white bundle curled up on a pile of rubbish, where it was using an old washing machine as shelter.

After waiting a full 24 hours to see if the mother returned, the member of public called Together for Animals member Mayhew for help.

They went straight out to investigate and rescue the little kitten, who was named Little Bean because of how small she was. She was only a few weeks old when she was found, so Mayhew’s Animal Welfare Officers made sure they were extra careful as they transported her back to their vet clinic for a general health check, which thankfully showed her to be in good spirits (if rather hungry!)

Little Bean was settled down in a warm and cosy cabin in Mayhew’s Kitten Block to rest and recover, and their team gave her plenty of one-on-one TLC. She soon showed herself to be an energetic and hungry little kitten, though she was bit quiet, which is unsurprising given her unusual start in life. They made sure Little Bean was happy, healthy and well-entertained, and she slowly began to get used to people’s presence, playtime, and the toys the team gave to her.

Although she was born a stray, Little Bean was rescued whilst she was young enough to be domesticated, so when she is ready she will be rehomed with a purrfect family. In the meantime, she will be cared for by the team at Mayhew, she will be neutered and got her up to date with vaccinations and flea and worming treatment. She has had a few mild tummy troubles since arriving, which the vets have put down to her spending time amongst the rubbish – they have no long term concerns and have prescribed medication to help settle her digestive system.